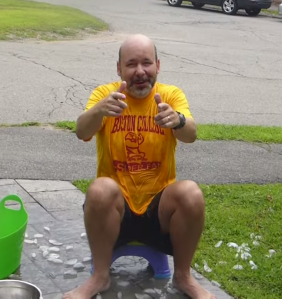 By now you have probably seen dozens of your friends, family, celebrities, and perfect strangers dumping ice over their heads to raise awareness and donations for ALS research.  You might know that Pete Frates, the inspiration behind the #icebucketchallenge to strikeout ALS, is a BC alumnus and captain of the Baseball team while in the Heights.  While it seems like everyone has a different opinion on the matter, the viral trend has raised an unprecedented level of money and awareness for what has really been an underfunded and overlooked disease.  The BC Grad Tech Club supports Pete and his efforts to strikeout ALS and many of our members have completed the challenge, including our President David LoVerme and our Faculty Advisor Professor John Gallaugher.  The movement has certainly taken off because of the genuine efforts and determination of those who started it and the goodness of the cause, but I also want to take a quick look at the Technology that has enabled it.

When Pete Frates entered BC in 2003, Facebook did not exist.  Myspace, Friendster, Livejournal and others were competing for users but none had the sheer user base needed to set off a viral campaign like the one we are seeing now.  BC was the 17th school to get Facebook after its founding in 2004 and it would be a little while more before the Wall would go from an open space editable by anyone to the newsfeed we now see projected to others.

The first iPhone was released (and marketed by BC’s own Phil Schiller) in 2007.  Prior to that a video going viral meant that for someone to do the ice bucket challenge, they would have needed a video or digital camera, then to tape the challenge, transfer it to a computer, upload it to YouTube (itself only founded in 2005), then share the link.  Such a process creates a significant barrier to entry and would have slowed the growth of the movement.  Smartphones reduce the process to one device and just a few seconds from filming to upload but even these did not reach 50% adoption in the United States until 2012.  Without smart phones, it would be hard to have the ice bucket challenge.

Video first started to make its way to Facebook in a meaningful way in 2011 but only if you played it.  One of the most enabling features of the Ice Bucket Challenge is scrolling through a feed and seeing your friends in motion dumping buckets over their heads.  This autoplay feature was only released in late 2013 and a strong argument can be made that the ice bucket challenge would not be as successful without it.

Sometimes lost in the fun of watching your high school teachers, your girlfriend, and George W. Bush dump ice water over their heads is the fact that it has also raised a ton of money for ALS research…$16 million as of my writing.  That is a lot of money to give to organizations most people had never heard of before.  What makes us so willing to break out the credit cards and input our information online?  This is a testament to the traction that online payment services have gained.  PeteFrates.com allows you donate using PayPal and the ALS Association allows donors to use PayPal or Amazon to complete their donations, often without having to input any credit card information if they already have accounts.  Companies like BC founded WePay are pushing the envelope even further with advances in identity and fraud checks and integration with crowdfunding sites to make fundraising even more accessible in the future.

There are lots of other tech elements that have helped enable the success of the Ice Bucket Challenge such as hashtags and tv online but I think this is enough to give a good taste of the impact Tech can have.  As noted academic Herbert Simon Said, however:

In my opinion, the Ice Bucket Challenge is a great example of good people using technology for a good purpose.  The BC Grad Tech Club seeks to fortify the Tech industry with Eagles of high moral character and to keep using technology to better mankind.

To learn more about BC Eagle Pete Frates and his fight against ALS, visit: www.PeteFrates.com

To learn more about ALS and what you can do to help, visit: www.alsa.org